Thirty-four-year-old Thomasina Williams, who lived out of her car in the past, can count on one hand the number of places that were her own.
Through the generosity of one group and thanks to a coronavirus stimulus check, she now has a furnished home for she and her 5-year-old daughter. 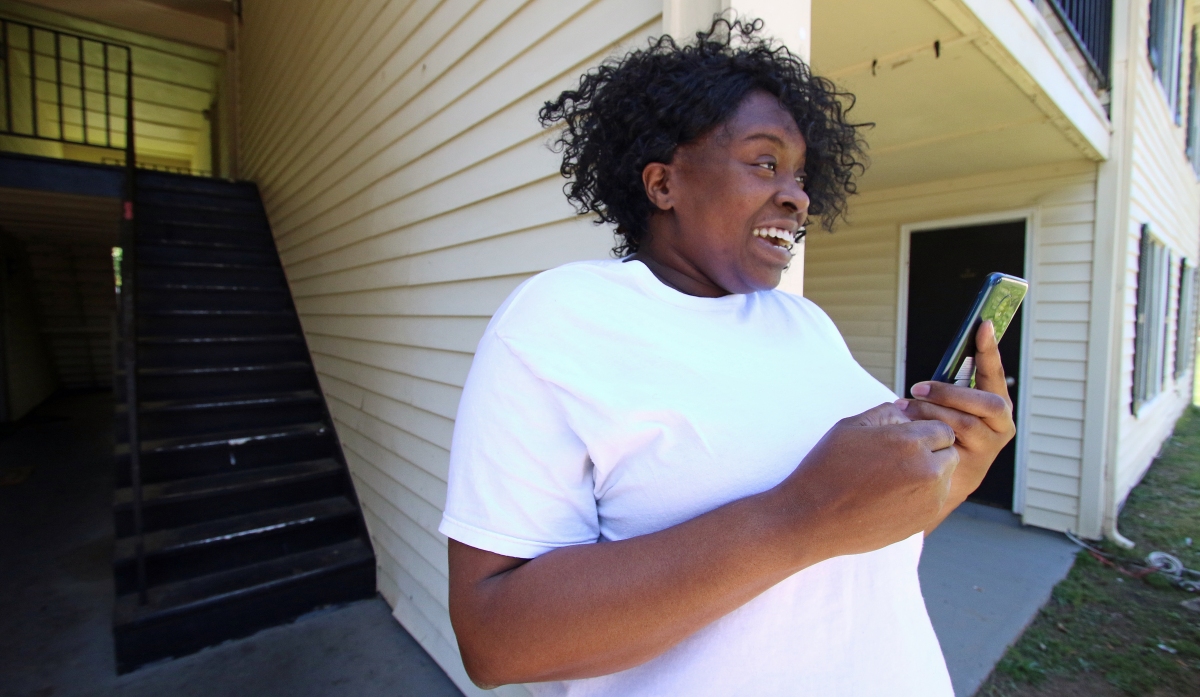 Editor’s Note: A version of this story first appeared in the May 17, 2020, version of The Gaston Gazette newspaper in Gastonia, N.C.

Thomasina Williams has been homeless before and knows what it’s like to live out of your car and have all your earthly possessions in your backseat.

After the death of her mother when Williams was just 16 years old, she’d spent the past 18 years bouncing from one family member’s home to another, from Virginia to North Carolina, searching for a permanent landing spot.

“It was tough,” she said. “I can count on how many places I had (to call home) on my hand. It was three. Three places that were my own.”

Williams had moved in with her brother and other family members in their Gastonia, N.C., home in September 20109, but was facing the very real possibility of being without a home again earlier this year. The family was moving to a smaller place and there wasn’t room for Williams and her 5-year-old daughter, Miacayla.

Williams was determined to not put her daughter through the turmoil she’d endured. She needed stability in her life.

“I’m just a person that don’t bother people unless I really need help,” Williams said. “It (being without a home) didn’t really bother me that much when I was young. It didn’t bother me until now when I’m getting older and wiser and I have a child.”

She and Miacayla had a home before in Virginia. But Williams said they lost both the home and her vehicle.

“I was struggling. My job wasn’t paying enough, I had a car note, taking care of her, her father was in and out of her life,” she said.

In March 2020, Williams landed a job as a custodian with the Gaston County public school system. Around that same time, she and Miacayla found a temporary home at the Gaston Inn, paying on a weekly basis.

Each weekday at 6 a.m., she and Miacayla left their room at the hotel on East Franklin Boulevard and walked five blocks to the bus stop at the Eastridge Mall. Miacayla was dropped off at daycare and Williams at the Gaston County School District office, where she was taken to whatever school she was working at that day. In the afternoon, the process would reverse itself with Williams and Miacayla walking back into their hotel room 12 hours later.

While blessed to have a job, Williams, who was without a car and had little money, was going to need a minor miracle and an angel.

Who knew the minor miracle would be linked to the coronavirus COVID-19 that has caused financial hardship, sickness and death to so many? Economic Impact Payments distributed by the federal government in April provided an unexpected boost to Williams’ bank account.

The stimulus check was a blessing, Williams said. The $1,700 she received for herself and Miacayla provided the security deposit and first month’s rent for an apartment at The Oaks at Edgemont apartment complex in Gastonia.

“This is the time to step out and try,” Williams recalled thinking as she held the check in her hands. “And when I tried, God opened that door.”

Phyllis Lowery, who has been a bus driver for the city of Gastonia Transit System for the past four years, remembers seeing Williams walking along the street.

“I used to see her walking a lot and one day we had Free Friday,” Lowery recalled. “I stopped and told her, ’You know, the bus is free all day today. You can ride anywhere you need to go.’”

That initial conversation would stem more talks and Lowery would come to learn that the woman she saw each of those cold mornings was out searching for a job.

“I started learning a lot about her,” Lowery said. “It had got to the point where she was in tears. She just didn’t know what to do and she felt like giving up.”

Williams told Lowery she had found an apartment, but didn’t have anything else other than she and her daughter’s few belongings. That’s when Lowery decided to act.

Lowery has been a member of Risa’s Special Delivery since its formation in January 2018. Over the past two years, the non-profit organization has made numerous donations to families and individuals in need. Lowery said she enjoys being a member of a group that’s devoted to helping people.

“Right now, everybody’s basically paycheck to paycheck,” Lowery said. “When we all come together to help and support each other, it makes it special.”

Lowery contacted Florence Eury, the founder of Risa’s Special Delivery, and told her of Williams’ plight. The story resonated with Eury.

“I’ve never been homeless, but as a single mother it touched my heart,” Eury said. “I could never imagine being homeless with my children.”

On Saturday, May 9, 2020, about 20 members with Risa’s Special Delivery went up and down the apartment complex stairs carrying items into Williams’ home. They were cleaning, helping to build bed frames and arranging furniture.

Eury said it was fitting that the delivery was made the day before Mother’s Day.

“It was planned for next Saturday, but I told them, ’I dare not have her stay in here with nothing on Mother’s Day. This is her Mother’s Day gift,” she said.

In just three days after asking for help on the group Facebook page, Eury said they were flooded with donations.

“Stuff just started coming in,” she said. “They got nice things and she had nothing. This is the first time we’ve done a complete makeover. It’s just a blessing.”

On Friday, May 8, 2020, Williams and her daughter entered their own apartment for the first time. On Saturday night, they sat in a fully-furnished apartment, surrounded by new couches, beds, lamps, television and plants with a full refrigerator and microwave.

“I don’t think it’s going to hit me until later,” Williams said. “It’s just been so long. Five years for my daughter… it’s a big blessing. This is the first time I’ve ever had someone come in and help me.”

She believes having their own home can change both her and her daughter’s life.

“I just want to tell everybody to ’keep your head up and keep on pushing, just keep pushing,’” Williams said. “This right here changed my life.”